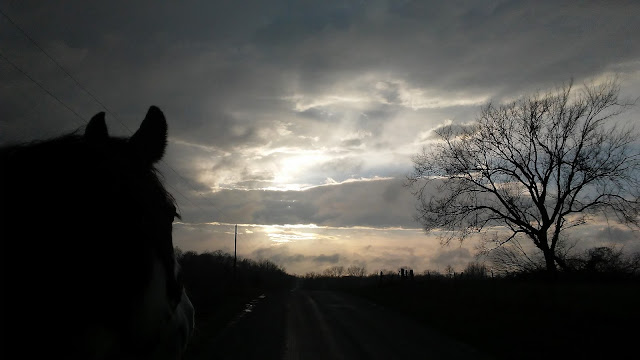 IT WAS ONE OF THOSE HAUTED DAYS THAT FALL BETWEEN THE SEASONS, a neatherrealm where sun and rain come together, and meadowlarks sing with pond frogs, while thunder fades like distant drums.

The long dry spell had been broken, smote by days of downpours, celebrated by the music of rivulets, running all along the roads.

A haunted day, not as in evil spirits, but strangely beautiful, as though the hand of God had moved over the land to calm the storm, and in His wake, nature lie aglow. Literally aglow with earth-bound clouds too bright to look upon, or at least to gaze on, like silver veils made from the sun, drifting over pastures backset by dark wooded ravines, and columns of light angling up like stairways to a heavenly sky.

I had just left my truck and was walking a ridge in cattle country when from out of this crazy mixed up miracle of nature appeared a large black and white horse. She was wet and wild from the storm, showing-out naturally, trotting up the hill to greet me with ears forward.

I hadn’t planned on riding her. The weather radar foretold a rough night and I was looking to put her in her stall. She was looking to go anywhere but her stall, two-thousand pounds of Clydesdale, a giant of a horse, dancing through the mud like a tomboy. And really, on that particular day, a man would have had to of been dead to not feel the wonder-of-creation. So I up and said, “Okay, you want to go, we’ll go.”

I didn’t saddle her, the tack shed stood over yonder, she was soaking wet, and I was in a rubberized rain suit with muck boots and an IH cap. I didn’t have a bit with me either, only a halter with lead rope, so I slung the lead over her huge neck and tied it under her chin to make a pair of reins. Then with the assistance of a nearby log, I jumped on her back and out the gate we went, down the gravel road, towards the valley below. Not a rugged mountain valley, but a gentle valley set in the rolling plains of Kansas.

At 17, Reba was up in her years for a horse, but in exceptionally good form which made her filly-like in spirit. She was a mature horse in the best way, and over the past seven years, we had come to know one another well. Part of my mission work was to train and keep her in shape, to pull my wagon on faith-based journeys through rural and small town Kansas. Two missions to date, one coincidentally of forty days and nights (summer of  2012, hottest year on record), and again a year later, for seventy-three days and nights during an unseasonably cold autumn and winter. Such living, outdoors and without arrangements, can really bring a man and his horse together. And in no small part, that is why, with fresh brome and clover poking up along the road to drive a horse crazy; I could ride her bareback with only a halter and just one hand on the lead. But if I claimed responsibility for this goodness, I would be overstepping my bounds.

Presently, Reba strutted as if her every atom possessed a single desire to get at that clover, her reward, waiting somewhere down the road. We turned west on a small curvy road that ran the valley floor. There the best clover and brome grew in the ditches, and in small patches hidden in wooded areas along streams. I slid off to stretch my legs while she grazed. A lady came in a white pickup and we had a brief but pleasant conversation, then another neighbor stopped by. Evening came and I took the photo that goes with this story.

Growing tired and hungry, I pulled Reba from her dinner. “It’s time to go home,” I said. She replied by bulling me gently back towards the clover with her one ton mass. I snatched hold of the lead directly under her chin, “Hey!” I said in a voice that stopped her in her tracks, and continuing in earnest, “I took care of you, now it’s your turn to take care of me. I’m tired and need to eat, and I need you to take me home.”

Messing with my smart-phone and not paying attention, a quarter mile passed before I realized Reba was walking on a beeline, unswayed by what had to be tremendous temptation on either side. I knew she hadn’t got her fill, and would normally need some course correction. She was a good horse, but also a spoiled pet, and yet there she was trucking straight as an arrow.  Naturally I couldn’t help but wonder if she had understood what I said. It just seemed impossible, and truthfully, not one second after my thought, she stopped on a dime, brought her head around and shot me a look that unmistakably said, “I know what you said.” Then turning back to the business at hand, she continued straight down the road. It was a rare thing, and it dang near gave me chills. I seriously doubt she understood my words, but it certainly was something beyond my understanding. Perhaps in that moment, God gave her a connection to the place from which my thoughts came. All I know is this; we think we know so much, but in truth, we know so little. And knowing that, is a good thing. 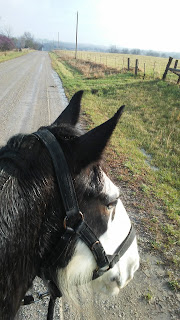 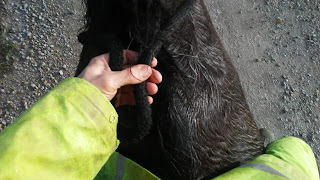